Check it out! This week in Oregon… 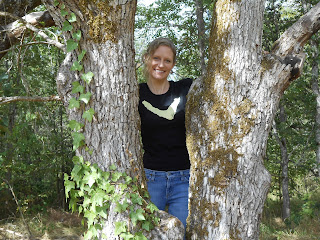 Okay, yes… you’re right. That’s not a bona fide moon bear…  just me in a moon bear-inspired t-shirt hanging out in a tree. But hang with me because it's for a good cause, and that cause supports moon bears. 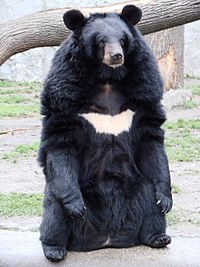 If you haven’t heard about moon bears before, or understand why they may need our support, please allow me to explain.

Moon bears are Asiatic black bears (more formally referred to as Ursus Thibetanus), and they reside in Asia’s forested mountain regions. Like many wild species, they are threatened by habitat loss, as well as poaching and hunting. But even more disturbing, they are frequently captured, confined and enslaved in tiny, filthy cages on bile farms where they may be strapped into rusty, Medieval-looking devices designed to keep them still as bile is continuously drained from their bodies via permanent fistulas, inserted catheters, implanted tubes, or repeated punctures. 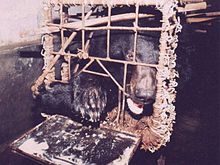 And we think the gestation crates used on pigs are horrendous…  It’s no wonder mortality rates are high.

It’s estimated that at least half of bile bears die from complications that occur during this surgery and extraction process. Those that do manage to survive endure anywhere from five to twenty or more years of misery and pain, muscle atrophy and severe mental stress, along with a variety of physiological issues.

The sole reason for this draconian affair is to collect their bile, which contains a relatively high amount of ursodeoxycholic acid (UDCA) valued for its use in traditional Chinese medicine. When the bears are no longer considered useful in that regard, they are usually slaughtered so that other body parts, such as their paws, fur, meat and gallbladders, can then be harvested.

Currently, more than 10,000 bears are being subjected to this torture in China, with another 1,600 or so in Korea and around 1,200 more in Vietnam. But the good news is that a number of good, loving souls have come together to set up sanctuaries and organizations designed to rescue, rehabilitate and care for these animals. One such organization is Animals Asia.

Headquartered in Hong Kong, with offices in China, Vietnam, Australia, Germany, Italy, the U.K. and U.S., Animals Asia works tirelessly to help these bears, along with victims of the cat- and dog-meat trades and animals abused while in captivity at Chinese zoos and safari parks. 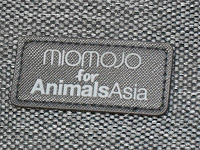 Recently, as I was perusing Twitter, as I often do, I came across a post from fellow animal lover and activist @AmCuriousNJ that told of an Italian company called Miomojo which has created a line of PETA-approved, certified vegan handbags and accessory bags that support Animals Asia. (At that time, they were also offering the lovely moon bear-inspired shirt I'm wearing in the photo above.)

I purchased the Essential Tote in grey polyester tweed with black vegan leather handles (also available in a natural cream color with brown vegan patent leather handles). It arrived pretty flat, but it didn’t take long to fill out and look great. 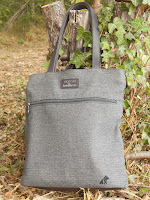 I’ve received numerous compliments and find it to be very functional, with a large zipper pocket on the front and a smaller one inside, a nicely lined interior, and a section to house a small laptop or tablet. 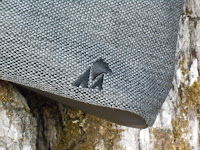 I must say that the materials seem to be of high quality, and the “leather” not only looks nicer than pleather but is also environmentally friendly. That’s right – no PVC. Or heavy metals. Or carcinogenic AZO dyes or phtalates.

And Miomojo has other styles to choose from. Also available in the same colors and materials are a backpack version, a weekender bag, makeup and cosmetic bags, a unisex washbag, and a pencil case. 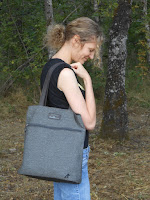 And everything is 100% cruelty-free. Plus, 20% of each sale goes to Animals Asia. AND right now they’re having a sale on the cream-colored styles. Talk about win-win-win! So if you’re interested, I suggest heading over to http://store.miomojo.com/store/en/# before that sale ends.


Note that I have no affiliation with this company and do not receive anything for writing this review. I’m just happy with my purchase, and I think you will be, too.

***UPDATE from Miomojo on January 20, 2017:
Thanks to you, our donations to charitable causes this past year surpassed USD$15,000, and together we could help in Animals Asia’s recent rescue in Vietnam, transporting six beautiful moon bears 1300km, from their tiny cages in a bear bile farm to the unfettered freedom of sanctuary life. After a nearly 10 year existence in unimaginably restrictive cages, in December the six bears found safe haven at the Vietnam Bear Rescue Centre in Tam Dao, where their long journey of mental and physical rehabilitation from a lifetime of chronic pain, trauma and cruel captivity immediately commenced. At the sanctuary they will receive expert health care, be introduced to a community of friendly bears and begin a new life free from cruelty and exploitation.

Know of any other great vegan products that also benefit good causes? Please comment and share! And while you're at it, connect with me on Twitter so that we can continue to share the goods and generate more awareness for animal rights.
Posted by Kim Smith at 1:40 PM